Considering that most of the time I run things in Docker and advocate for it, it is only fair that I mention (in case you missed it), that the Docker team has decided to make some changes in their business model.

Docker always had a paid tier but since yesterday, we now have four (4) tiers of subscriptions.

A complete list of feature comparisons can be found here: https://www.docker.com/pricing?utm_campaign=2021-08-31-business-tier-launch&utm_medium=email&utm_source=mailgun&utm_content=pricing

Starting with as low as $5/month in the Pro tier all the way up until $21/user/month.

Just to be clear what this all means here are the main points:

The new terms take effect on August 31, 2021 with a grace period until January 31, 2022 for those that will require a paid subscription to continue using Docker Desktop. By continuing to use Docker, you are agreeing to the new Docker Subscription Service Agreement.

So what does all this mean for us enthusiasts and hobbyists? Well not much. For my humble needs, 200 Docker image pulls per day, and 1 organization, I can say that Docker Personal is more than enough (for now).

As a side note, in case you want to play with Docker in a non-CLI environment, consider running all your Docker tasks with Portainer. 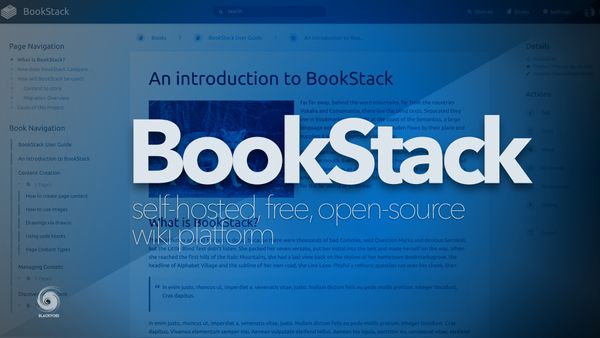 📢UPDATE 23/12/2021 - BookStack v21.12 is out with new features including Outbound webhooks. Details on the bottom. 📢UPDATE: Added docker-compose for running BookStack via an external database